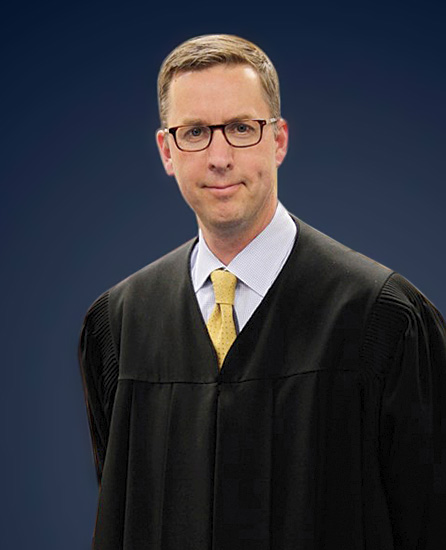 In January 2015, Andy was appointed by Judge Loyd to his current position as Magistrate Judge of the Johnson County Juvenile and Family Court. Judge Roesener presently presides over a broad and diverse docket including child abuse and neglect cases and juvenile delinquency matters. Prior to accepting his current appointment, Judge Roesener operated a private law practice in Franklin focusing on litigation in both state and federal courts.

Judge Roesener graduated from Franklin College with a Bachelor of Arts degree in political science and obtained his Juris Doctor Degree from Drake University (with honors) in 1997.

He is married to Asha Roesener, a graduate of the Ohio State University, who works as a quality assurance representative for Elanco. The Roeseners have lived in Johnson County for twenty years, where they chose to start their family which includes two daughters, Mary age fifteen, a Freshman at Roncalli Catholic High School, and Lucy age thirteen, a seventh grader at St. Rose of Lima Catholic School. The Roeseners are active and longstanding members of the St. Rose of Lima Catholic Church in Franklin, Indiana.

“I have found my work as the Juvenile and Family Court Judge to be equally challenging and humbling. The position has given me the opportunity to develop good working relationships with court personnel; county government agencies; law enforcement; youth and family service providers; and members of the bar. My judicial philosophy centers around the simple but indispensible precept that I will invest whatever time is necessary to be prepared to hear every case that comes before me. I have always strived to be honest, forthright, fair and courteous in both my private practice and in my current judicial role. I will continue to represent these qualities which are essential to the fair administration of justice. I walk into this great challenge with an honest appreciation of the importance that this position holds to our community and its citizens.”